Chronological list of aerial phenomena, with emphasis on objects of mundane nature

This chronological database contains faithful descriptions of aerial objects, comets and asteroids, recorded before 1850 and the modern invention of mechanized flight (dirigibles and aereoplanes).
Plausible explanations for the descriptions include: Local prestige by the use of "Tall Tale"; Ignorant means of describing cosmological phenomena such as comets or asteroids; Mechanical objects. The final explanation lends to conclusions not debated in this website (wither pre-cataclysmic technological civilizations living safely in the Earth, on the Moon and other planets, or, "aliens"!), for lack of knowledge as concerns any conclusion.
The information provided is independent of the conclusions or perception of works cited, nor are anyone cited responsible for the conclusions (if any) provided on this website.

It is noted that cosmological phenomena, being eternal in its place in the psyche of humanity, lends itself to fantastic divination as to their nature, and employed as the subject of art. Therefore, depictions may exist in all aeons. However, the "Heinsohn Horizon" appears to be reflected in this chronological page, as well.

* "One of the Earliest Accurate Recorded UFO Sighting from China" (educatinghumanity.com) [archive.is/0NcwZ]
---


* "The Nuremberg Chronicle, UFO of 1034, in 15th century book" (educatinghumanity.com)[archive.is/EefTv] [begin excerpt]: The Nuremberg Chronicle is an illustrated Biblical paraphrase and world history that follows the story of human history related in the Bible; it includes the histories of a number of important Western cities. Written in Latin by Hartmann Schedel, with a version in German translation by Georg Alt, it appeared in 1493. It is one of the best-documented early printed books—an incunabulum (printed, not hand-written)—and one of the first to successfully integrate illustrations and text.
A rare typeset book from 1493 contains what may be the earliest pictorial representation of a UFO. The book Liber Chronicarum (or commonly known as the Nuremberg Chronicle), describes a strange fiery sphere, seen in 1034, soaring through the sky in a straight course from south to east and then veering toward the setting sun. The illustration accompanying the account shows a cigar-shaped form haloed by flames, sailing through a blue sky over a green, rolling countryside. This "may" be the first work that actually contains actual illustrations of UFO's.
As was common at the time, the book did not have a title page. Latin scholars refer to it as Liber Chronicarum (Book of Chronicles) as the phrase appears in the index introduction of the Latin edition. English speakers have long referred to it as the Nuremberg Chronicle after the city in which it was published. German speakers refer to it as Die Schedelshe Weltchronik (Schedel's World History) in honour of its author. [end excerpt]
--- 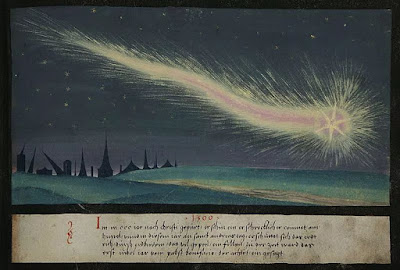 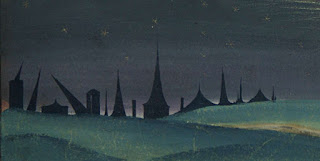 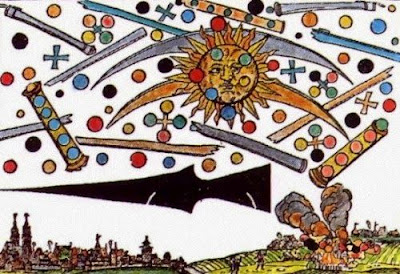 
* "The First Recorded UFO Sighting in The USA - 1639 Boston" (educatinghumanity.com) [archive.is/9tcS9]
* "First Unidentified Submerged Object (USO) In the USA - Boston Mass, 1644" (educatinghumanity.com) [is.gd/WZ1wXH]: In January 1644, America's first USO, or Unidentified Submerged Object, was sighted. A USO is an aquatic UFO. Governor John Winthrop made two entries in his journal in regards to this unholy affair.
---


* "Both Sides of French Coin From 1680 has Significance to Ufologist" (educatinghumanity.com) [archive.is/uMqI1] 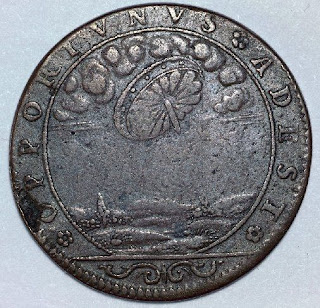 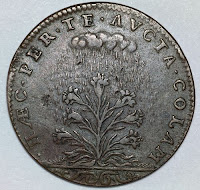 
* "Two Large Glowing Wheels Over Hamburg Germany 1697" (educatinghumanity.com) [archive.is/lDeiD]:
This illustration shows the sighting of two UFOs over Hamburg, Germany, November 4, 1697. The objects were described as being "two glowing wheels". (Note: if the round object on the far right is the moon, the UFOs were either very low or very large. Notice also the many people pointing -- this was likely a famous event.) 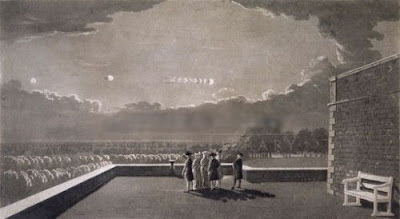 * "Astronomy: a meteor shower in the night sky. Mezzotint after H. Robinson, 1783" (catalogue.wellcomelibrary.org) [archive.is/yLkmm]:
[Newark upon Trent?]: 14 Oct.r 1783
An accurate representation of the meteor which was seen on Aug.t 18th. 1783. At first it appeared as one ball of fire, but, in a few seconds, broke into many small ones. It's course was from N.W. to S.E. This extraordinary phaenomenon was of that species of meteor which the great phisiologist Dr. Woodward and others call the Draco volans or Flying dragon. The above view was taken at Winthorpe near Newark upon Trent, by Henry Robinson, schoolmaster. - and published by him as the Act directs, 14. Oct.r 1783. This plate is inscribed to Roger Pocklington Esq.r by his much obliged humble servant Henry Robinson. H. Robinson delin. 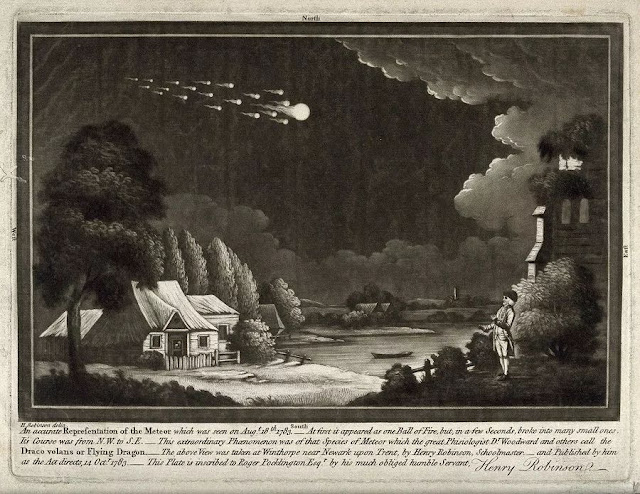 
* Leonid Meteor Storm, as seen over North America on the night of November 12-13, 1833, from E. Weiß’s Bilderatlas der Sternenwelt (1888). via commons.wikimedia.org [archive.is/tx1iT] 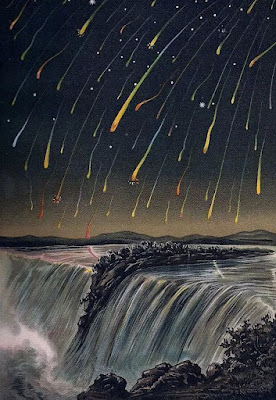 
* "Object Seen Above Tennessee College Campus - 1853" (educatinghumanity.com) [is.gd/or88tZ]: On June 1, 1853 a luminous object was seen by many as it hovered over a Tennessee college campus. As the sun rose over the campus of Burritt College, numerous students—who apparently were early risers in those days, too—were startled to see two luminous objects in the sky. According to professor A.C. Carnes, who reported the incident in a letter to Scientific American, the first had the appearance of a small new moon, while the other resembled a large star. The small object then vanished, while the bigger one changed shape, first into a globe and then into an elongated shape parallel with the horizon. The smaller light then became visible again, and increased rapidly in size, while the other object shrank. The two objects continued fluctuating in a similar fashion for the next 30 minutes. “The students have asked for an explanation, but neither the President nor Professors are satisfied as to the character of the lights,” wrote Carnes. While he himself speculated that the occurrence might have been caused somehow by atmospheric moisture, the incident remains a mystery.
---


* "The James Lumley Case October 1865" [archive.is/0dbCM], concerning a syndicated newspaper report in the USA, 1865, of a crashed mechanical object.

Posted by Canonicus Gabriel Sages at 10:39 AM No comments: