Technology of the ancient realms

* "Speaking statue", from "Musurgia Univeralis". Description [http://is.gd/MeS2IR], full image [archive.is/lbkUe]. The talking statue technology is described in the book of the Revelations of John [archive.is/7lqB6]. 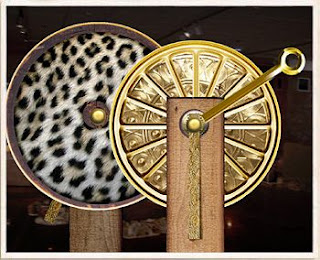 There can be no doubt that ancient civilizations were aware of static electricity even if they may not have fully understood it. They also appreciated the godlike power of lightning and must have been curious to observe this effect replicated in miniature when the fur of a cat was rubbed against certain materials in a darkened room.
The effects of static electricity were first recorded by a Greek philosopher, Thales of Miletus, who lived between 624 BC and 546 BC. He is said to have experimented with amber, which the Greeks referred to as Elektron, and cat fur to create an electrical discharge as well as magnetism. From this observation a simple machine consisting of two spinning disks, one covered with leopard fur and one coated with glass or amber could be connected to gold axles and foil strips which would produce an electrical charge capable of generating sparks several inches in length.
By spinning the disks in opposite directions a static electrical charge could be transferred to the gold foil strips to create visible sparks. [end excerpt]
===*===*===

A refutation by a European against Islamic scholars [archive.is/fqeZl] contains remarkable evidence about China's primacy of many modern technologies. This is a clue as to China's advancement before Rome, and may provide questions as to pre-Romanized Aryans' knowledge of such technology, what they adopted in Central Asia before the migrations to Europe. The advanced technology of China allowed the universal Empire of Mongolia to invade the Roman Empire 650BM. The article also may provide hints at the level of sophistication of Roman technology 1000BM to 700BM.
===*===*===

The descriptions of flying machines contained in the "Book of the Revelations of St. John" are explicit:
* "Jesus, the Son of Man, was LITERALLY Seen in the Clouds in A.D. 66" [archive.is/qyRGY], [archive.is/IRNyn], citing Josephus [archive.is/8vfy4] and other authors of that time and age.
The technology to electrically split hydrogen and oxygen out of water, or to electrically create steam, alongside a 100,000 lumen arclight, and a projector shining images of chariots and soldiers on horseback amidst the steam clouds...
The idea that Jesus was the last heir to the throne of King-of-Kings over the imperium of the Jewish dynasty ruling the realm of Parthia is articulated by Steven Collins [archive.is/k61lL].
* Excerpt from the book "The Lost Ten Tribes of Israel...Found!" by Steven Collins, webpage 1 [archive.is/fif9A], 2 [archive.is/ucfnE], 3 [archive.is/X8HDp], 4 [archive.is/ZbmD6], 5 [archive.is/Or1sO], 6 [archive.is/qT04Q]
More
* [archive.is/7cacc] [archive.is/HRyRc] [youtube.com/watch?v=1Sky8ZGt1LQ] [youtube.com/watch?v=ADKYykRxl5k]