The Great Walls of China, a chronological database of Depictions and Descriptions 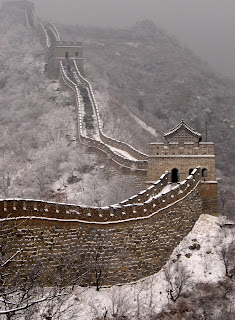 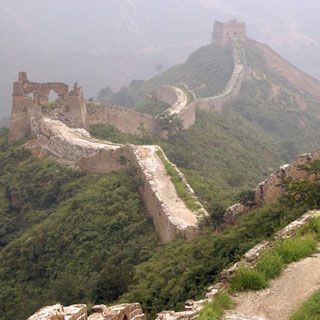 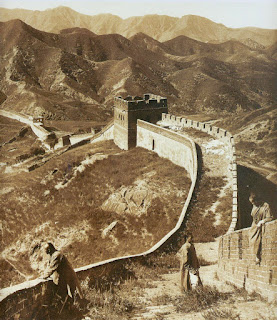 * "Minimum intervention highlighted in Great Wall preservation" (2017-06-06, news.xinhuanet.com/english/2017-06/06/c_136344763.htm) [archive.fo/vebP2] [begin excerpt]: The Great Wall, a symbol of China, is actually not just one wall, but many interconnected walls built between the third century B.C. and the Ming Dynasty (1368-1644). The existing sections are mainly the Ming wall, which stretches over 8,800 kilometers. [end excerpt]
* "Maintenance on Great Wall Jiayu Pass completed" (2017-12-19, news.xinhuanet.com/english/2017-12/19/c_136837365.htm) [archive.is/B8fEP]: A maintenance project has finished on the Jiayu Pass, a famed part of the Great Wall built in the Ming Dynasty (1368-1644) in Jiayuguan City, northwest China's Gansu Province.
The Jiayu Pass is regarded as the western start of Ming Dynasty Great Wall and continues to the Shanhai Pass in Hebei Province on China's eastern coast.
Inscribed on the UNESCO list in 1987, the pass features 11.7-meter-high tower walls and meanders across undulating hills and rocks. The site attracted 1.1 million visitors in 2016.
Qiu Jian, a relic protection official, said the work used traditional construction methods and materials, helping to restore the past glory of the military fortress and protect its cultural heritage.
The Great Wall had a poor drainage system, and was cracked and weathered by dry and windy conditions before maintenance began in 2012.
The government-funded work cost over 300 million yuan (45 million U.S. dollars), and renovated a 3.5 square km area of the Great Wall and a 70 square km scenic zone.
The renovation took five years and included gate and beacon towers. 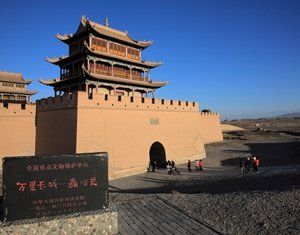 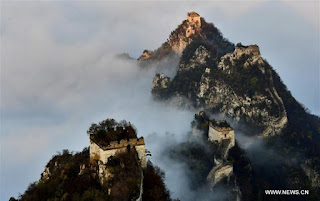 * "Great Wall's guardian wins over locals; Farmer's decades of efforts to protect historical relic not always appreciated" (2018-01-26, chinadaily.com.cn),
- pt. 1 chinadaily.com.cn/a/201801/26/WS5a6a671fa3106e7dcc136adb.html) [archive.is/IGkwi]
- pt. 2 (chinadaily.com.cn/a/201801/26/WS5a6a671fa3106e7dcc136adb_2.html) [archive.is/ZyYUR]
[begin excerpt]: Zhang Heshan, 62, from Chengziyu village in Qinhuangdao, has been a ranger for 40 years, patrolling and protecting a 10-kilometer section of the wall constructed during the Ming Dynasty (1368-1644). The section, which spans seven villages including Chengziyu, has several forms of fortifications typical along the famous sprawling structure, such as watchtowers, miniature castles, passes and platforms to observe and fire at enemies below. "This is a historic treasure that all generations should protect," Zhang said. [...]
William Lindesay, the British founder and director of the International Friends Society of the Great Wall, met Zhang in 2007 when he was traveling along the Chengziyu portion.
Impressed by the section and what Zhang had been doing to preserve the Wall, Lindesay took other members of his group and a sponsor to visit Zhang in 2008.
Together, they launched a Great Wall protection project to fund six wall rangers like Zhang for two years, and helped Zhang publish a book－Whispers from the Wall: Great Wall Folktales told across the Centuries－which contains folk tales about the Chengziyu Great Wall.
In addition to Lindesay's efforts, more travelers from near and far have visited Chengziyu in recent years. "They like the original state of the wall rather than some newly constructed segments in modern times," Zhang said.
He said some sections near Chengziyu have been developed and renovated to become scenic spots.
"I hope the Chengziyu section can become a famous tourist attraction, too, but definitely not with too much development or renovation," he said. [end excerpt]
- Photo caption: A 10-kilometer section of the Great Wall spans Chengziyu and six other villages in Qinhuangdao, Hebei province. 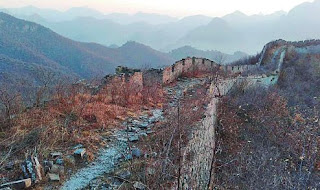 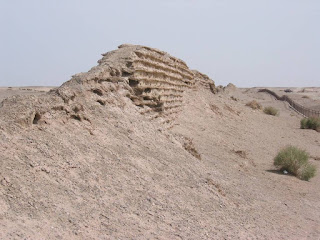 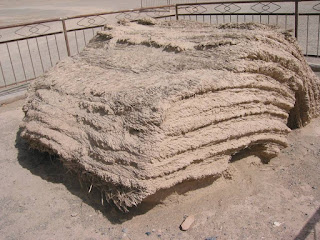 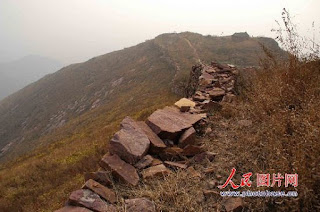 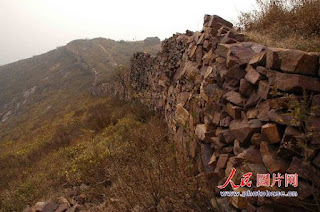 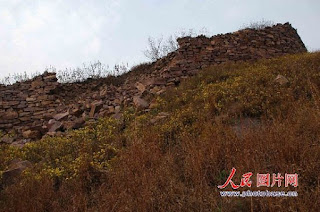 * "Mongolia – The Gobi Desert & Grasslands" (2012-07-04, wanderingasianguy.com/2012/07/04/mongolia-the-gobi-desert-grasslands/) [archive.is/u02XX], photo caption: One of the oldest parts of the Great Wall of China, dating back 2000 years old. The crumbling walls and watch-towers were constructed with clay and has not stood the test of time, when compared to the newer segments built from stone and bricks found in Beijing. The left side of the wall is China hence the new road, the right side is Mongolia. 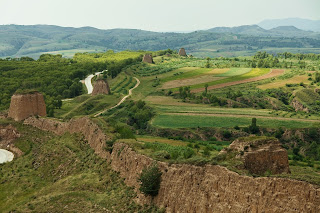 * "New section of Great Wall of China discovered by British researcher; Discovered in Mongolia, it's the first time a part of the wall has been found outside China; British researcher William Lindesay used Google Earth to find the structure; The Great Wall of China is in fact many different structures built by several dynasties over different routes" (2012-02-29, dailymail.co.uk/sciencetech/article-2108127/New-section-Great-Wall-China-discovered-British-researcher.html) [archive.is/ucoDY], photo caption: High life: Here the Wall is routed up and over an ancient volcanic cone and is composed of black blocks of basalt 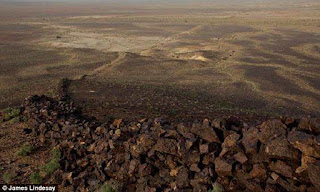 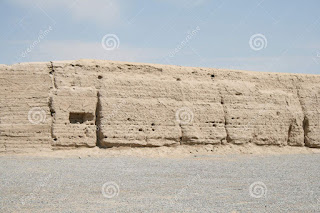 
The confusion that is wrought by these different walls when confounded by Modern China's efforts at retaining ancient architecture for purposes of prestige and tourism...
* Banner from (yrotsih.com):

"The Great Wall", a chronological set of depictions and maps:

* "China on the map: Ancient people's cartography does not lose to today's people, show you the history of making ancient Chinese maps" (daydaynews.cc/en/history/401110.html) [archive.is/tQMWF]

* "The Stone Map of the Han People and Minorities of the Song Dynasty" (1136 AD), first known map from the Yellow river basin to show a Great Wall. 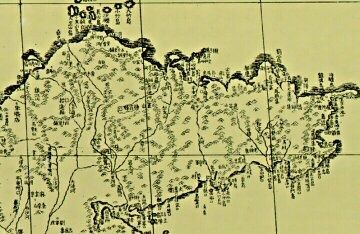 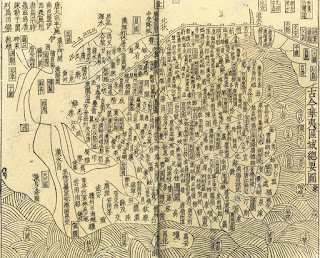 * "Hua yi tu" (loc.gov/resource/g7820.ct000284/) [archive.is/LKhpb] [begin excerpt]:
Original stone was engraved in Fuchang 7 nian, i.e. 1136 A.D. The stone is now in the Forest of Stone Steles Museum in Xi'an, China.
Covers China in Nan Song Dynasty, from east to the sea, including Korea to the west of Pamier area, from north to the Great Wall, northeast to Heilongjiang region, to the south of Hainan Island. [end excerpt] 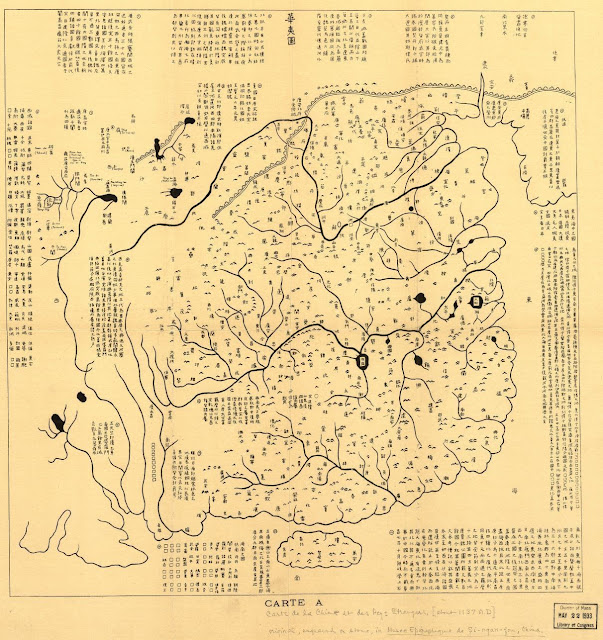 * "Huayi tu" (en.wikipedia.org/wiki/Huayi_tu) [archive.is/cZYyG] [begin excerpt]:
on the reverse side of Huayi tu is the gridded Yu Ji Tu (Map of the Tracks of Yu the Great) carved in 1142. This map is the earliest surviving example of lattice cartographic grid found in Chinese map. [end excerpt]
- image caption: Rubbing of Yuji Tu 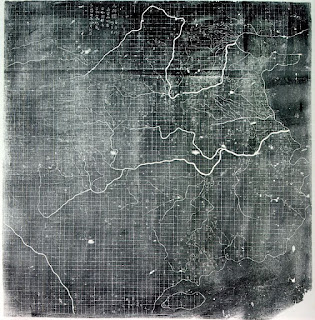 * "Sihai Huayi Zongtu" (en.wikipedia.org/wiki/Sihai_Huayi_Zongtu) [archive.is/CYAuE]:
The Sihai Huayi Zongtu ("Complete Map of the Four Seas, China, and the Barbarians") is a Chinese world map dated to 1532, the 11th year of the Ming Dynasty's Jiajing Emperor. It is now located in the Harvard Library.
The map is oriented towards the north and displays various locations in China, as well as Korea, Siberia (as Luohuangye), Nepal and a vast India, Persia, on the central continent. Japan lies beyond the East China Sea, along with such imaginary locations as the "Land of the Pygmies". The Roman Empire appears (as Daqinguo) beyond the "Western Sea". 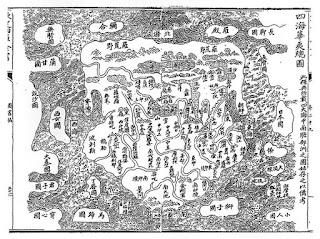 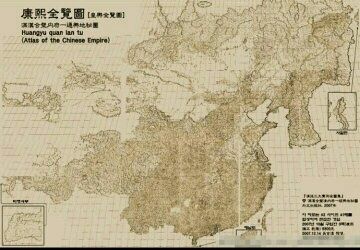 
* Map showing Japan, China, and Tibet (1522, by M. Waldseemüller, for the edition of "Ptolemy’s Geography" printed by L. Fries at Strasbourg). 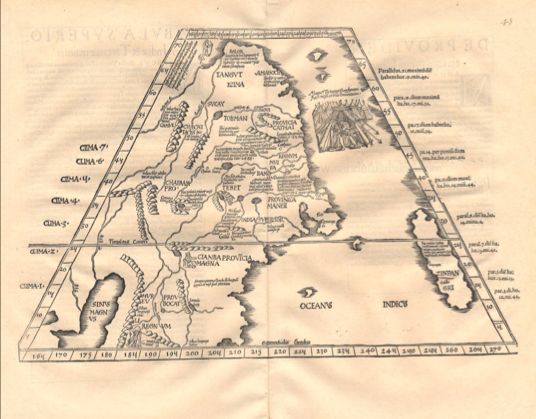 - More info (retrieved 2015-10-23 from cartographic-images.net/Cartographic_Images/368.1_China_Japan__Tibet.html) [archive.is/JP4EB] [begin excerpt]: Often called “The First Printed Map of the Far East”, however, obviously the Chinese had printed maps of this area since at least the 12th century. A very attractive, dark-impressioned example of the first printed Western map to focus on China and Japan. Albeit in rudimentary form, the map shows all of China, Tartary, Japan and much of Southeast Asia, including Cambodia (Bocat) and Tibet. The latter is both shown and named in the very center of the map. Some provincial divisions are indicated for China, and Japan appears as a single, large, north-south-oriented island. [end excerpt]


* "Chinae olim Sinarum regionis, nova descriptio" (1584, by Abraham Ortelius, and Ludovico Georgio whose birth name is Luiz Jorge de Barbuda), is first map in the Roman realms to have a Great Wall. The author's sources were from among the Jesuit missions to China. 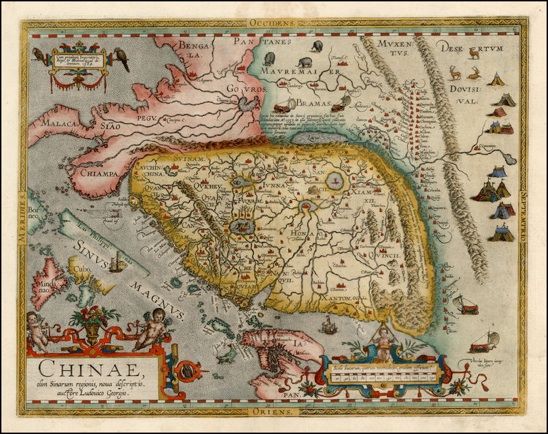 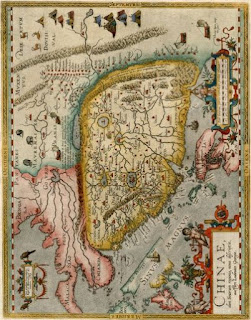 * (en.wikipedia.org/wiki/Luiz_Jorge_de_Barbuda) [archive.is/nkJhk]
* (cartographic-images.net/Cartographic_Images/410H_Chinae.html) [archive.is/bTdCN] [begin excerpt]: One of the first printed European map of China (see also #368.1). It is signed by Ludovico Georgio, whose real name was Luis Jorge de Barbuda. He was a Portuguese cartographer with Spanish employers. He also produced an early history of China from which of the information for this map must have been drawn. When this map appeared, it was by far the most accurate one of China. Japan is shown on a curious curved projection reminiscent of Portuguese charts of the period with Honshu dissected along the line of Lake Biwa.
The outline shows the region horizontally orientated with North to the right of the page and includes parts of Indo-China, the Philippines and most of Japan. The Great Wall of China is shown here for the first time on a European map. The Tartar yurts, or travelling tents, are dotted across the plains and steppes of Central and Eastern Asia.  Notable is the illustration in eastern China of the wheeled “sail machines”. These four wind wagons are shown on the right and top of the map, perhaps the earliest examples of a depiction of this device, which in Europe is certain to have originated in the Low Countries, but which had been invented much earlier in China. The wind wagon is well documented in a treatise in Dutch on the subject by Simon Stevin that appeared in Dutch in the year 1600.
As one of the earliest printed map specifically of China and the first to show the Great Wall, this map remained the standard type for the interior of China for over sixty years. With its three lushly designed cartouches and many illustrations of indigenous shelters, modes of transportation and animals, this is one of Ortelius’s richest engravings. A reflection of just how early this map is in the West’s knowledge of China is suggested by the fact that Portuguese Jesuits were not allowed to establish a mission on Chinese soil until 1577, just seven years before this map was published. Although the map’s Portuguese maker, Barbuda, was himself not a Jesuit, his sources for the map were Portuguese Jesuits. The Chinese characters found in the text on the verso of the map were the first introduction to Chinese language for many educated Europeans of the time. The map and text would have forced many Europeans to see China for the first time as a nation and culture distinct from the others of Asia.  [end excerpt]


* "Tartarie" (1659, by Nicolas Tassin, geographer of the King), including a section of the Great Wall of China 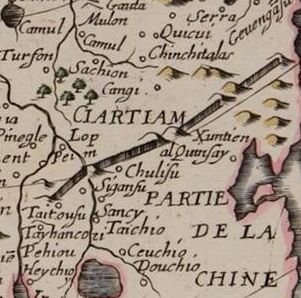 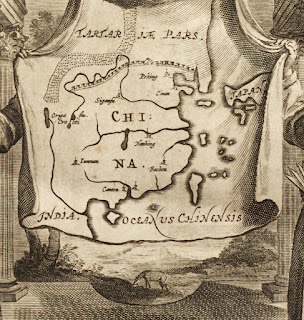 The Fortified Walls of Coryo (Korea)

* "Walled City of Pyongyang" (2015-12-07, naenara.com.kp/en/news/news_view.php?0+95370) [archive.is/8XU3k]: It is the walled city of the capital of Koguro, mostly covering the present-day Central and Phyongchon districts of Pyongyang.
It had favorable geographical conditions as it had Moran Hill in the north and was surrounded by the Taedong and Pothong rivers, the natural moats, in the east, west and south. The outer walls were approximately 16 kilometres in circumference.