Gunnar Heinsohn: "On the antiquity of hominids"

Adapted from the original posting: "On the antiquity of hominids" (2008-07-02, via message board at thunderbolts.info) [archive.is/ILv05] [begin posting text]:

Lloyd has asked for a debate on the thoughts and writings of Professor Gunnar Heinsohn of the University of Bremen.
The following is from an email concerning the question of the antiquity of the Neanderthal:

Mueller-Karpe, the first name in continental paleoanthropology, wrote thirty years ago on the two strata of homo erectus at Swanscombe/England: "A difference between the tools in the upper and in the lower stratum is not recognizable. (From a geological point of view it is uncertain if between the two strata there passed decades, centuries or millennia.)" (Handbuch der Vorgeschichte, Vol I, Munich 1966, p. 293).

The outstanding scholar never returned to this hint that in reality there may have passed ten years where the textbooks enlist one thousand years. Yet, I tried to follow this thread. I went to the stratigraphies of the Old Stone Age which usually look as follows
- modern man (homo sapiens sapiens)
- Neanderthal man (homo sapiens neanderthalensis)
- Homo erectus (invents fire and is considered the first intelligent man).

In my book "Wie alt ist das Menschengeschlecht?" [How Ancient is Man?], 1996, 2nd edition, I focused for Neanderthal man on his best preserved stratigraphy: Combe Grenal in France. Within 4 m of debris it exhibited 55 strata dated conventionally between -90,000 and -30,000. Roughly one millennium was thus assigned to some 7 cm of debris per stratum. Close scrutiny had revealed that most strata were only used in the summer. Thus, ca. one thousand summers were assigned to each stratum. If, however, the site lay idle in winter and spring one would have expected substratification. Ideally, one would look for one thousand substrata for the one thousand summers. Yet, not even two substrata were discovered in any of the strata. They themselves were the substrata in the 4 m stratigraphy. They, thus, were not good for 60,000 but only for 55 years.

I tested this assumption with the tool count. According to the Binfords' research--done on North American Indians--each tribal adult has at least five tool kits with some eight tools in each of them. At every time 800 tools existed in a band of 20 adults. Assuming that each tool lasted an entire generation (15 female years), Combe Grenals 4,000 generations in 60,000 years should have produced some 3.2 million tools. By going closer to the actual life time of flint tools tens of millions of tools would have to be expected for Combe Grenal. Ony 19,000 (nineteen thousand) remains of tools, however, were found by the excavators.

There seems to be no way out but to cut down the age of Neanderthal man at Combe Grenal from some 60,000 to some 60 years.

I applied the stratigraphical approach to the best caves in Europe for the entire time from Erectus to the Iron Age and reached at the following tentative chronology for intelligent man:
- 600 onwards Iron Age
- 900 onwards Bronze Age
- 1400 beginning of modern man (homo sapiens sapiens)
- 1500 beginning of Neanderthal man
between -2000 and -1600 beginning of Erectus.

Since Erectus only left the two poor strata like at Swanscombe or El-Castillo/Spain, he should actually not have lasted longer than Neanderthal-may be one average life expectancy. I will now not go into the mechanism of mutation. All I want to remind you of is the undisputed sequence of interstratification and monostratification in the master stratigraphies. This allows for one solution only: Parents of the former developmental stage of man lived together with their own offspring in the same cave stratum until they died out. They were not massacred as textbooks have it:
- monostrat.: only modern man's tools
- interstrat.: Neanderthal man's and modern man's tools side by side
- monostrat.: only Neanderthal man's tools
- interstrat.: Neanderthal man's and Erectus' tools side by side
- monotstrat.: only Erectus tools (deepest stratum for intelligent man)

The year figures certainly sound bewildering. Yet, so far nobody came up with any stratigraphy justifiably demanding more time than I tentatively assigned to the age of intelligent man. I always remind my critiques that one millennium is an enormous time span--more than from William the Conqueror to today's Anglo-World. To add a millenium to human history should always go together with sufficient material remains to show for it. I will not even mention the easiness with which scholars add a million years to the history of man until they made Lucy 4 million years old. The time-span-madness is the last residue of Darwinism.


Heinsohn is not putting an exact age on the Neanderthal die-out; what he IS stating is that there is no legitimate interpretation of existing evidence which would indicate that they died out any more than four or five thousand years ago. The question is, what if anything might there be in the way of evidence which might tend to support or refute such a claim. I intend to offer what I can in the way of support. "Refutations" I've seen in the past have always looked more or less like

"Pooh Pooh, that's too ridiculous to argue over, everybody knows the last Neanderthals died out 30,000 years ago..." Perhaps Lloyd can do a bit better than that. To my knowledge, nobody else in the Kronia/Thunderbolts crowd ever has.

One thing I notice immediately is that Heinsohn is claiming a very late die-out for this last hominid (Neanderthal), i.e. something like 3500 years ago.
Assuming that were true, then you have to note that humans had attained artwork by that time and that you would guess that if you were to look around hard enough, you might find this last hominid in some area of prehistoric art.
Consider that artists used to portray the Neanderthal as a sort of a brutish lout: 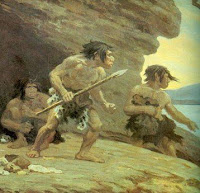 but that more recent and serious depictions show him like this: 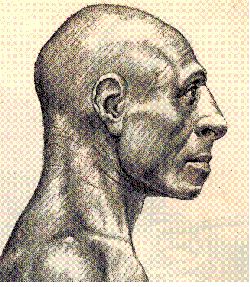 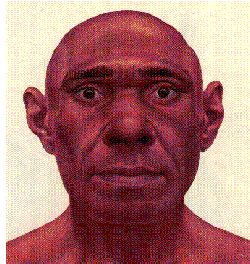 Jay Matternes' reconstructions of Neanderthals appeared in the Oct. 81 issue of "Science". Scientists had known for some time that the standard reconstructions were based entirely on early, arthritic skeletons, but nobody had really done a serious job of reconstructing an image of these people from more recent evidence.

The first time I ever saw that image I had an overwhelming sensation of deja-vu, i.e. I'd seen that face before: 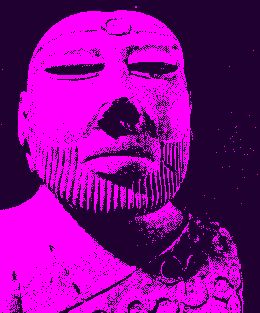 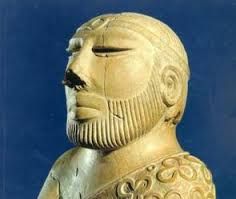 Sir Mortimer Wheeler "Civilizations of the Indus Valley and Beyond notes that this physical type, which he calls a "priest/king type" appears in statues along with other images more easily recognizable as modern people, and assumes that the type shown is "non-representational art". The same physical type shows up in other statues as well but not quite as clearly, e.g. 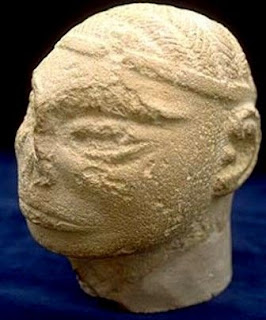 
[comment at the message board thread]:
In Heinsohn's reconstruction the civilization of men (historic times) began around 1300 BC (tentatively dated). He is supported in this by Heribert Illig who published "Die veraltete Vorzeit" / "The aged prehistory" in 1988 in parallel with Heinsohn's book "Die Sumerer gab es nicht" / "The Sumerians never existed". In this book Illig did for Europe what Heinsohn did for Mesopotamia, without dependencies. Illig also avoided any dependencies on Egyptian chronology. The technical basis for the reconstruction of the Egyptian chronology was published in a joined book of both in 1990: "Wann lebten die Pharaonen?" / "When did the pharaohs live?". In "Die Veraltete Vorzeit" Illig started the neolithic age in the second mil. BC mainly for art historic reasons. In 1991 Heinsohn published "Wie alt ist das Menschengeschlecht?" / "How old is mankind?". This book went through at least two extensions in the following years as new material came in to support the argument. It is currently in it's sixth edition from 2009. Heinsohn is simply applying the same methods he used on historic times to earlier strata. It is the stratigraphic method. That's all there is to it.


Materials Provided For Evaluative Purposes Only. Please contact the owner of the work produced on this page for any pertinent questions concerning any use other than that of evaluative usage. The author of the work cited on this page is not in any way associated with this website.
Posted by Canonicus Gabriel Sages at 6:22 PM