Just as mysteriously as Dura Europos [Syria, on the banks of the Euphrates, abandoned after 256-7 A.D.], far more celebrated metropolises of Antiquity disappear in the sand, without having suffered any previous attack. Among them, at a linear distance of some 1,000 km to the Southwest of Dura Europos, Memphis, the fabulous capital of Ancient Egypt, commands attention. It is scientifically identified only at the occasion of the Napoleonic "Campaign of the Pyramids" (1798-1801; Champollion 1814), yet in the 13th century A.D., the geographer Abdul-a-Latif al-Baghdadi had been moved to awe and admiration by its gigantic fields of ruins. Conquests of the city by the Greeks around 332 B.C., and by the Romans around 30 B.C., do not harm it in any way, in the contrary, they result in further development. Suetonius (70-122) is fascinated by its cult of Apis. Beginning in the late 3rd century, one would expect at least some Christian voices to make themselves heard. Yet "in the Coptic period there is hardly anything known about Memphis. It dropped out of existence" (Memphis 2012a/2012b). Indirectly, that is, on the basis of the accepted dates for the Arabic expansion, the conclusion is reached that Memphis fell to Islam in 639. Until this date, it is supposed to be still Roman, yet seemingly abandoned. There is no doubt that the building of Fostat, that is, of Old Cairo, is occurring in its immediate vicinity. At this occasion, Memphis does indeed play a role - as a quarry for the new city. But because Fostat itself becomes only apprehensible archaeologically in the 10th century, nothing tangible shows up for the period from the 3rd to the 10th century, around and after the end of the Roman empire. A mysterious whiff of death spreads itself in a manner so final over this metropolis of antiquity that no rebirth is possible.

Roman London - 3,500 km away from Memphis in linear distance - fares no better. "Inside the city one knows practically nothing of the period from the end of the Roman administration around 410 to the resettlement by the Saxons under Alfred the Great in the 9th century" [for which finds are equally missing; GH]. How the space was used during all these centuries, while the great Roman buildings slowly disintegrated, remains one of the great and to this day unsolved mysteries of London. Around 410, the built surface within the walls was already enormously reduced. Whole areas had been stripped of buildings and buried under a layer of dark mud (often referred to as ‘dark earth'). This shows that the soil had been made over for agriculture or cattle-raising. The dark earth mud may therefore have formed itself already in the 3rd century" (Schofield, 1999). And it does not only cover London. In Leicester - a Roman camp built beginning in 50 A.D. as Ratae Corieltauvorum - a greyish layer made of sand, gravel, charcoal and Roman kitchen waste (bones, mussels, charred cereals) at places up to three meters thick, covers the Roman culture layer (Mcphail, 2010). A mighty flood has whirled together marine and riverbed material, smothering the city.

On the continent, the same thing happens to Antwerp. The excavations of 2008-2009 recover a vague site dated to the 9th and 11th century, surrounded by walls. Directly under it, and therefore directly above ther vicus of the 2nd-3rd century, lies dark earth with inclusions of Roman remains (Wouters/Devos/Tys, 2011).

The twenty hectar site of Maastricht (Urbs Treiectensis)is hit just as destructively and is now to be found 3 to 6 meters below the pavement: "The finds from and features of the soil of Maastricht have made one thing obvious: the settlement was completely destroyed in the second half of the 3rd century and totally and finally levelled at the beginning of the 4th century. The precise time and origin of the catastrophe we unfortunately do not yet know." (Panhuysen, 1996, p.125; Pointed out by E. Ernst). The author then expresses his belief that warlike Franks brought about the disappearance of Maastricht (Panhuysen 2008, 701). Yet a farther reaching gaze evaluates the evidence differently: "The conditions changed from the beginning of the 3rd century. To begin with, and from 200 A.D. onward, the warm period which had been dominant for more than a half millenium came to an end. The climate in Europe became cooler and more humid, which was certainly one of the causes of the increasing restlessness of the Germans. This climatic change induced even in Northern Italy a rise in the groundwater and the spread of lagunes in areas which had been occupied by agricultural land before. The German raids certainly played a role in this intertwining of causes and consequences, but one would be hard put to indict them as the main culprits for the demise of provincial Roman culture along the Rhine." (Galsterer, 1996, 48/51).

Antwerp, Maastricht and the Rhine Valley bring us close enough to Aachen, to look there also for the traces of catastrophe. And indeed "there extends here over the ruins of the antique baths a mighty layer of debris and swamp the surface of which, judging from the numerous inclusions of medieval ceramics, must have laid open all the while into the 12th century." (Sage, 1965, 325; Hinweis E. Ernst). Nobody believes that it was the Germans who carted in and dumped this layer of swamp. There are other forces at work here.

The destructions which these forces caused result in the following stratigraphic succession, in which the earliest destruction dates are given for the 3rd century. Later chronological indications are brought forth through texts of dubious dating, but they are not ascertainted stratigraphically. There does not exist, therefore, any Roman city with a striving occupancy which in 230 finds itself smothered in a flood of mud, only to continue thriving above said layer, then is buried under another layer of mud in 350, over which yet another blossoming is brought to end by yet another layer of mud in the 6th century. For every city, there exists only one Roman period which is buried under mud, for which the earliest date must be put into the 3rd century A.D. A stratigraphy with a succession of layers such as the following exists nowhere:

This is true also of Constantinople, where the layer of mud is dated to the 4th century (according to a suggestion of E. Ernst). But Constantinople too has no further mud layers in the 3rd or 6th centuries, only one alone, so that the "Harbor of Theodosius," discovered in 2009 in Istanbul-Yenikapi, where up to now 35 war and commerce ships have been discovered under former vegetable gardens and blue mud, must also belong into the 3rd century, and not to the reign of an emperor precisely dated to 379-394. The devastating Mediterranean tsunami of 365 does not add itself as one more big catastrophe shortly preceding the destruction of the harbor, but stands again for the very same event in the 3rd century. The same holds true for the tsunami which erases Olympia, and which for the time being is dated to the 6th century (BDW 2011). The shattered ceramics of Yenikapi, which are dated to the 4th century, but to the 3rd by the present author, are mixed with ceramics which are presently dated to the 8th and 9th century. The same is true for the boats. Some look like specimen from the 4th, the others from the 10th or 11th century. Archaeologists cannot understand how pots and ships distant in time by 500 to 600 years can be shattered together. By scrapping this period as a phantom period, the problem solves itself.

That Europe must get by without archaeological layers not only for the period of 600-900 but also the period 300-900 was shown already in 1923 by Helmut Gams and Rolf Nordhagen, who tried themselves at a stratigraphic chronology of postglacial catastrophes between 10,000 B.C. and 1920 A.D. They identified, from "the positioning of early Germanic moor mummies, of which most stem from the 3rd century" (Hahne, 1918), a civilization break occurring in the 3rd century, as well as "tectonic events" and an "increasing process of swamping" at the end of the Roman period (Gams/Nordhagen 1923, 52).

To this break, which is also geological, accompanied by the shifting of Bavarian lake surfaces, might also belong the "remains of a Roman road" on the lower Isar river, near Platting, "in a terrain presently unpassable most of the time because of the high groundwater levels" (Gams/Nordhagen 1923, 45). But for the period of "ca 350-600 A.D." the two geologists found themselves confronted with a "segment not verifiable stratigraphically until now" (Gams/Nordhagen 1923, 306).

Addendum: "Bath and The Ruin"
It is understandable that, at the sight of the ruins of Bath (Aquae Sulis) in England the Anglo-Saxons should been under the impression that these mighty marble buildings should have been the work of giants.
Reconstitution of the Roman city of Bath (Aquae Sulis), which disappeared, swallowed in mud.
- Caption from (historyfiles.co.uk) [archive.is/i06L4]: An artist's impression of Roman Aquae Sulis, later known as Caer Baddan to the Romano-British and which retains that name in an altered fashion today (Bath) 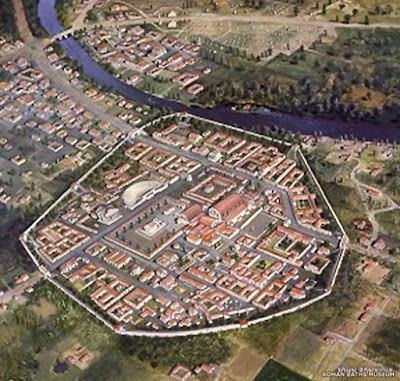 The anonymous poem THE RUIN, from the so-called Exeter Book, is generally dated to the 8th century A.D. Yet in Bath, too, now new buildings can be made out from the destruction the 3rd century A.D. to the 10th century A.D. so that the poem could just as well have been formulated at the end of the 3rd century. For "with the departure of the Romans, and the waning influence of the Roman empire, began the decline of the bathing culture and of the baths themselves, including those of Bath. These literally disappeared in mud and were only rediscovered by chance in the 19th century." (According to wikipedia - Bath, history).

The conquest of Aquae Sulis by the Anglo-Saxons under Ceawlin and Cuthlin after their victory in battle near Deorham (Dyrham) is generally dated to 577. They give Aquae Sulis the (Old-)Saxon name of Hat Batha, english: "Hot Baths," to which the present name harks back. According to Gunnar Heinsohn, the conquest of Aquae Sulis could be dated back to the late 3rd century, in consideration of many parallels and chronological doublings.
Posted by Canonicus Gabriel Sages at 9:05 AM